My report from City Hall October 2017

May I firstly wish a belated Happy Diwali to my readers? I attended the launch of the Mayor’s Diwali programme, and also events round the constituency.

This report covers a slightly shorter period than usual, reflecting the pattern of meetings at City Hall, though I have been out and about quite a lot this month, including visiting a lot of fire stations, a visit to Hull with the Economy Committee and to Strasbourg, in my role as the Assembly’s representative on the Congress of Europe.

I Have prepared a short briefing on the impact on the cost of living and Brexit in London.

See also this article from the Independent: Brexit: what would a no-deal mean for your finances?

The Assembly has set out a detailed paper to the Mayor on Brexit and EU Citizens.

The negotiations on Brexit are going slowly, a matter of concern in my view and for many others too: Brexit Transition Deal Needed By Christmas, Says Bank Official.

Turning to the Congress of Europe (an entirely separate body from the EU, being part of the Council of Europe, I spoke in two debates.

The first was on the draft Human Rights Manual for Local Authorities. I stressed the importance of mainstreaming human rights principles which should not be seen as a tick box exercise. This requires training of staff at all levels to ensure the public with whom they engage are treated with dignity and respect. I raised the absence of any reference to those with disabilities in the document, who can be seen as second class citizens, especially those with learning disabilities.

Secondly, I spoke in the debate on the situation in Catalonia. While accepting the solution has to be a constitutional one for the Spanish and Catalan Governments to find, I said that international intermediaries may be able to help when positions are entrenched, as here. However, my main point was that we cannot accept double standards, with criticism of some countries, such as Turkey behaving in undemocratic ways, and ignoring Spain, when the same happens with police violence trying to suppress the referendum, prosecution of hundreds of local mayors, the arrest of politicians and officials, and the shutting down of websites and the media, prohibiting debate.

I was due to speak on a third issue, fighting corruption, but the debate ran out of time.

The main work of the Committee this month has been our inquiry on financial exclusion, with sessions looking at the cost of borrowing for the less well off and the  alternatives available; and on education in schools on personal finance.

There has been some misplaced and ill-informed criticism by Barnet Conservative MPs of the Mayor over the Northern Line. I have published a full response to this: here and here.

I have been very concerned over cuts in frequency of night buses, and I am pursuing this.

TfL are consulting on Colindale bus services. You can comment up to 12th November.

I also visited the TfL exhibition on their plans for Holborn Tube Station, which I mentioned in my last report: the plans look ambitious and will deal with the chronic overcrowding issues, if it comes to fruition, thought the timescale si quite a long one, with completion expected in 2023.

I also had a full range of Mayor’s Questions on transport, though most are still awaiting answers.

The Mayor has continued his campaign to try to persuade the Government to fund the Met properly, warning we face the lowest officer numbers since 2002 and a cut in police officers of 26% since 2010.

See also this Police financial pressures graph which explains where the cuts figures come from.

There have been a number of press reports suggesting that crimes of low value or with slim chance of prosecution will be dropped, as reported in the Guardian.

This is clearly driven by the financial position facing the Met, an issue I pursued again at MQT when I questioned the Mayor about the pressures on the police, reductions in officer numbers, and also the detective shortage.

This is of course, all at a time of rising crime in most categories.

At the Police and Crime Committee, we looked at the issue of gun crime at out last themed meeting. The draft minutes and transcript are now available on the Greater London Authority’s website here.

Borough mergers: see the letter from the Mayor, following up my previous questioning concerning the criteria against which they will be assessed.

see also the letter from AC Hewitt on ‘S’ (non-emergency) calls in the merged boroughs and Dedicated Ward Officers.

Camden is the capital’s worse borough for moped enabled crimes, an issue I continue to pursue with the Met.

In my last report I wrote of the Digital Security Centre. I visited East Finchley with them to meet High Street small business and to give advice, which was well received. 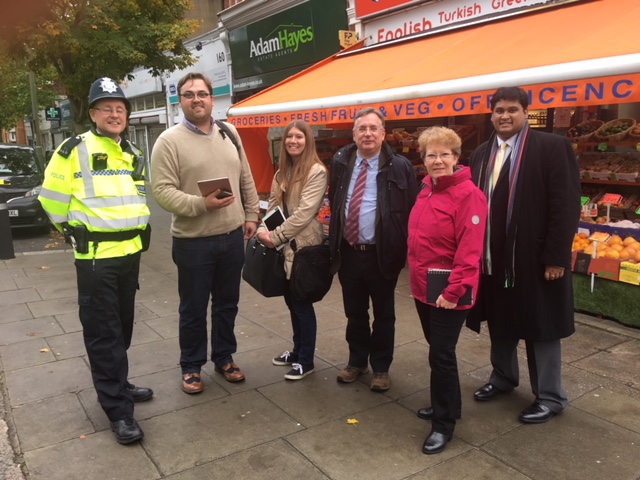 My written policing Mayor’s questions and answers for October.

This month has been dominated by big planning issues.

I spoke at the Mayor’s ‘call in’ hearing on the National Institute for Medical Research site in Mill Hill, as did four local residents. Although  the Mayor has achieved an increase in numbers, I was concerned about the ‘split’ of the affordable homes required between social rent and part ownership, the latter requiring incomes of up to £79,000, which in my view is not affordable. I was also concerned about the inadequate parking provision, but overprovision of cycle spaces: 900 spaces, double the number of properties- but the site is at the top of a hill so long and steep it would be graded a category 1 climb in the Tour de France King of the Mountains competition!  Even so the Mayor passed the application, the only alteration being in the number of replacement trees to be more mature than original proposed.

I also attended Barnet Council planning committee for the applications for a bookmakers shop in Colindale and an academy school in Underhill. I believe both applications were badly handled by the Council and were certainly against the overwhelming wishes of residents.

At long last a year on, Family Mosaic are to fix new homes in Edgware that were shoddily built.

with the Regeneration Committee, we visited the Brent Cross /Cricklewood site for a meeting with residents and a briefing.

The Toxicity Charge — the T-charge — started earlier this month. Now,  older and more polluting vehicles driving in the central London Congestion Charge Zone will need to meet minimum emission standards, or pay an additional £10 daily T-charge. This is in addition to the Congestion Charge and will operate from 07:00 to 18:00, Monday to Friday.

It is  part of the Mayor’s commitment to clean up London’s dangerously polluted air, which contributes to thousands of premature deaths each year in our city. It damages health throughout our lives — leading to smaller lungs in children, and greater risk of dementia, cancer and strokes when we get older.

This is only one part of the Mayor’s clean air plan, leading by example by cleaning up TfL’s bus and taxi fleets, tackling pollution outside schools and introducing more cycle lanes.

I wrote a letter to support an application for funding for re-laying Strawberry Vale’s football pitch, the state of which has deteriorated markedly.

The London Fire Brigade’s latest firefighter recruitment round is open.  The campaign is formed around a new website containing interactive features and fresh content, leading to a new mobile friendly platform for applicants to use. One of the main communication tools produced is a film featuring real London firefighters presenting the different roles a professional firefighter juggles in order to protect the communities the LFB are here to serve.

As part of a LFEPA programme to call on all the fire stations that participated at Grenfell Tower, to thank the crews involved. I have been to five fire stations this month, both to do this but also to hear from firefighters at first hand and to discuss the issues that are of interest to them.

We now have confirmation that LFEPA will be abolished as of April next year, when the new governance arrangements under the Mayor (similar to MOPAC) will come into effect.

I also spoke out to back the Mayor’s call for the Government to fund the to-be restored Fire Safety Inspectors cut by Boris Johnson, in light of the fire in a back street garage in Burnt Oak.

The Economy Committee looked at education in schools on personal finance.

Our local hospitals missed A&E waiting times targets yet again, which is worrying when we are not yet in the period of winter pressures.

On World Mental Health Day, I called on businesses to put mental health on their agenda.

Each month the Mayor produces a report on his activities. His 15th report is here.

A:  Nothing: he is barefoot