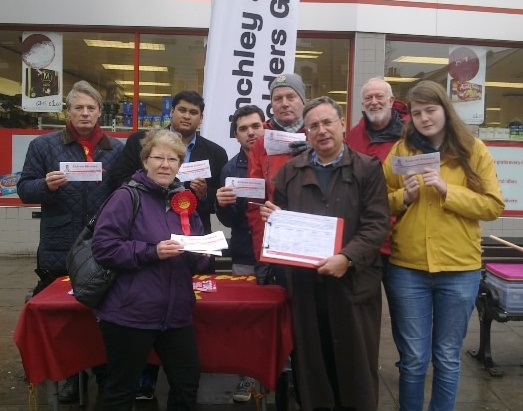 Barnet and Camden London Assemby Member Andrew Dismore today launched a campaign to save neighbourhood policing and the jobs of 85 Police Community Support Officers in the two boroughs.

Mr Dismore is calling on London Mayor Boris Johnson to protect neighbourhood policing and the popular local PCSOs from savage spending cuts forced on the Metropolitan Police by the Conservative Government.

The PCSOs will be taken off the streets at the end of December if the cuts go ahead.

Mr Dismore said: “This will be the end of the Safer Neighbourhood Teams that have done so much to cut crime and give residents reassurance that officers are there for them.

There are 33 PCSOs left in Camden and 52 PCSOs left in Barnet, who will all be taken off the streets, most of them to be made redundant.

Mr Dismore launched a petition to the Mayor calling on him to save the PCSOs.

“We the undersigned residents of Barnet and Camden petition against the cuts to our police service due to the decisions of the Conservative Government and Conservative Mayor of London.

“Since 2010, our two boroughs have already lost 288 police officers and 208 PCSOs resulting in police station closures and the end of the Safer Neighbourhood Teams. On top of the £600 million cut so far, the Met now faces a further £1billion of cuts under the Conservatives. The Police Commissioner is already predicting we will lose between 5,000 and 8,000 police officers as a result. We also face the end of the remainder of the PCSOs, so each ward will have just one PC; the end of all Chief Inspectors; the end of local borough policing; more station closures and more privatisations.

“The duty of the Mayor and Government is to protect all residents and we call on them to meet their duty to us by ending this cuts programme now.”