The first meeting of the new London Assembly has today called for the running of the EU Referendum vote in Barnet to be removed from Barnet Council, “Following the electoral fiasco during the Mayoral and London Assembly elections.”

The Assembly passed a motion proposed by Andrew Dismore, Labour London Assembly Member for Barnet and Camden, calling for:

The full text of Andrew Dismore’s motion carried by the Assembly today is below.

Speaking at the Assembly this morning Mr Dismore said that Barnet Council was ‘not fit to run a whelk stall, let alone an election or referendum.’ 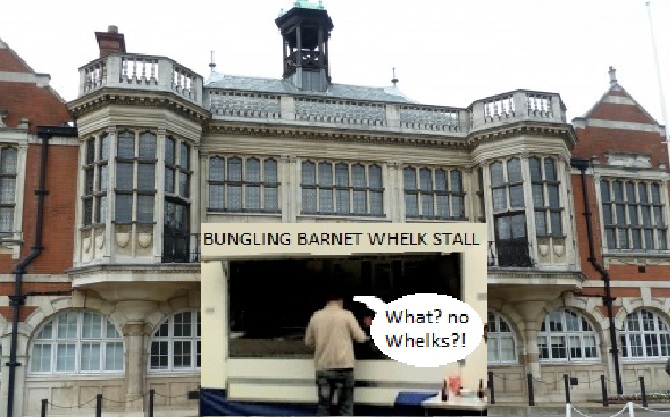 The chaos in polling stations on Thursday 5 May “was only the tip of Barnet’s electoral dung-heap” and was the consequences of cuts, privatisation and a complete lack of scrutiny and oversight.

Mr Dismore told the Assembly that Barnet Council ‘had form’ in election mismanagement, with five previous investigations into failures in election administration.

Mr Dismore showed the Assembly a thick folder of complaints he had received, covering the full range of election administration, and not just the problems of the wrong registers at the polling stations. He referred to the woefully inadequate electoral register, problems with postal votes and poll cards, missing and wrong addresses and the ‘hapless Capita hotline’.

‘Bungling Barnet has become a national laughing stock. They are not fit to run a whelk stall, let alone an important election or the forthcoming referendum.

‘Their inquiry has not even begun, yet we are just over a month away from the referendum. They have had no fewer than five previous inquiries into other election cock ups, yet there was no improvement – in fact, things have clearly got worse. No one can have confidence in Barnet’s ability to sort things out in time for the referendum vote, probably the most important for a generation.

‘Barnet’s under-resourced, under-trained, under-experienced but over-worked elections staff must not be scapegoated; the responsibility lies with those at the top. While the departure of the Chief Executive is welcome, I am concerned we are heading for yet another ‘behind closed doors’ whitewash and that nothing significant will change.

‘Barnet should be put in special measures for their appalling election maladministration.

‘It is time for the Leader of the Council, Cllr Cornelius, and the Chair of the General Functions Committee, Cllr Scannell, to accept their share of the responsibility for what happened, do the honourable thing and resign.

‘As Barnet cannot be trusted to put their house in order in good time, another council with a track record of efficient and impeccable elections, like Camden, must be put in charge of the referendum in Barnet, as if the result is close (as the polls predict) the consequences of another failure could not just have national but also international repercussions, including not just political but financial and economic too.’

Following the electoral fiasco during the Mayoral and London Assembly elections, this Assembly has significant doubts about the ability of London Borough of Barnet to manage and administer elections.

In Barnet, the supplementary register, rather than the full register, was supplied to polling stations. By the time the error was spotted and remedial action taken, a significant number of   voters were disenfranchised, though many were able to return to vote later.  Many postal votes did not arrive on time, or were not received at all. Many poll cards were not received in time or at all.  The election hot line was unavailable for most of the day.

The consequences of these problems, though, pale into insignificance when compared to the state of the electoral register in Barnet, which is worryingly deficient.

As a consequence of the significant issues raised, this Assembly has no confidence that Barnet could run a whelk stall let alone be able to sort out the register and rectify these errors and inefficiencies by the time of the EU Referendum, especially as the details of their own inquiry have  not even been announced yet.

The Assembly therefore calls on London Elects and the Electoral Commission to intervene actively to take over the running of Barnet’s election administration for the Referendum and to conduct an urgent review   of the state and accuracy of Barnet’s electoral register; and also proposes that a London local authority with a record of excellent electoral administration such as Camden should take over the management of the European Union Referendum in the London Borough of Barnet.