At today’s Mayor’s Question Time, Andrew Dismore AM, Labour London Assembly Member for Barnet and Camden and Chair of the Assembly Fire Resilience and Emergency Planning Committee, questioned the Mayor Sadiq Khan over slow progress in the removal of Grenfell type cladding  from tall buildings and the prospects (or otherwise)  of justice for Grenfell  under the next Conservative leader, probably Boris Johnson, given his bad record towards the fire service when Mayor.

‘In her leaving speech, the Prime Minister reiterated her claim that nothing like the Grenfell Tower fire must happen again. Yet two years on, no new legislation has been brought forward to reform fire safety, thousands of Londoners are still living in blocks with flammable cladding, and 17 households affected by the Grenfell fire still have yet to find permanent homes. Do you agree that whoever emerges from the scrum to become the next Conservative Leader and the next Prime Minister, their priority must be to fix finally the issues brought to light by the Grenfell Tower and to provide justice to those affected?

‘Could I remind you, not that I think it necessary, that

1 the Hackitt Review, the Government commissioned review reported a year ago – but implementation of the recommendations has only just begun and new legislation is not expected until 2021.

2 Whilst the Government introduced a temporary ban on flammable cladding on new residential buildings over 18m last November, nothing was said about other high but less tall buildings, such as the flats in Barking which went up like a torch on 9th June

3 Fire testing the wide variety of other types of cladding didn’t begin till 30th April this year and even then does not include fire fumes and smoke from them, which are the main killers in fires, not the flames.

4 In June 2018 they announced a Joint Inspection Taskforce to speed up private sector remediation but it is still not operational.

5 It took until a month ago for the Government to allocate some funds for private sector remediation – but bids cannot be made till July, let alone actually starting the work.

6 As of May this year, there were more private sector residential buildings with no remediation plan in place at all, compared to the number that had been actually fixed, including over 100 in London

7 And of course the public inquiry and police investigation are months behind.

‘Would you agree the list of late or non-activity by this Brexit obsessed Conservative Government is little more than an insult to the memory of the 72 victims of the fire, to the survivors, to the local community, and to the 4,600 social and 10,600 private sector London families still living in fear, in blocks with dangerous cladding on them?

‘What do you think the prospects are of justice for Grenfell, if former Mayor Boris Johnson were to become Prime Minister?

‘A man who broke his election promise not to cut the Fire Brigade with his 2014 fire brigade cuts axing 10London fire stations, 14 fire appliances, and 553 firefighter posts: when I challenged him about them at MQT, his response was to tell me to ‘get stuffed’;

‘When I challenged him about the 26 Oct 2015 Camden Road fatal fire where the first fire engine took over 13 minutes to arrive because he’d closed the nearest station in Belsize and no fewer than 10% of London’s fire stations on that day were off the run, he replied ‘you are talking total –‘

‘Another of his broken promises after the 2014 cuts was that there would be no more cuts, but he axed a further 13 fire engines in 2015/16

‘And amongst the worst of all, Brian Coleman former AM and then Chairman of the Fire Authority exposed Boris Johnson use of 4 letter foul language about the families bereaved in the 7/7 terror attacks victims, hardly compassionate Conservatism. 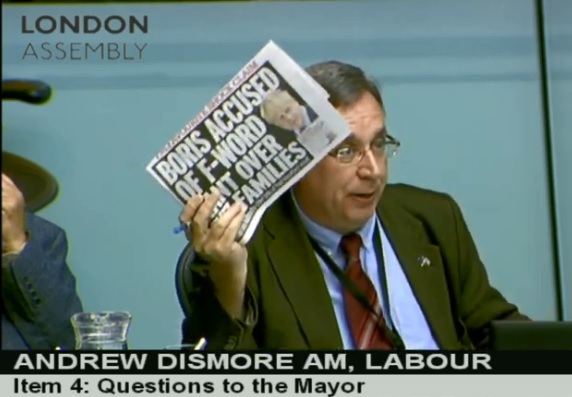 ‘Do you consider any of the Conservative leadership contenders, especially front runner Boris Johnson will deliver justice for Grenfell?’

The Mayor said that The Government’s failure to deliver on the pledges made after the fire was shameful. It was unacceptable that 17 families still live in temporary accommodation, and the community felt ignored and neglected. Thousands still live with unsafe cladding, and the Government’s flammable cladding ban only applies to high rise buildings, but the fire in Barking recently showed that there is a risk to low rise buildings as well. New buildings could be being built with flammable cladding as a result of Government delays. It will be important for the next Prime Minister to look after vulnerable people, but the record of the front runner is a cause for concern because he was hiding from his record by not turning up to hustings.

‘Two years on from Grenfell, thousands of people in both social housing and the private sector still do not know how long it will be before their homes are made safe. With their fixation on Brexit, the Government has failed to get to grips with other urgent business, which has gone by the wayside. This is a shambolic disgrace and it is high time the Government accepted its most important duty to the country- to ensure its citizens can live safely in their homes. Given his appalling record as Mayor of London, cutting the Fire Brigade and showing indifference at best to victims, if Boris Johnson becomes Conservative leader and then Prime Minister, I have little hope that justice of Grenfell will be achieved any time soon.’’

On 14 June 2017 a fire broke out in Grenfell Tower, probably from an electrical fault in a fridge in a resident’s flat. The fire then spread out a window and ignited the aluminium composite material cladding that had been fitted to the building in 2016. 72 people died in the ensuing fire.

The public inquiry was supposed to produce a Phase 1 report on the events of the night of the fire before Easter 2019, having begun work in summer 2018. This has now been delayed until October 2019. Phase 2 is set to begin in early 2020 at the earliest. The Met have carried out thirteen interviews under caution. In June they confirmed for the first time that these include manslaughter charges, the highest possible penalty. The Met has so far maintained that no criminal charges can be taken forward until the public inquiry concludes, to avoid prejudicing the outcome. This will mean it is 2021 at the earliest before charges are brought.[1]

Despite the Hackitt Review, commissioned by MHCLG, reporting in 2018, moves to implement the recommendations only began in June 2019. Implementation of new legislation is not expected until 2021 at the earliest.

The Government has said it accepts the review’s findings, which include:[2]

In November 2018 the Government introduced a ban on flammable cladding on residential buildings over 18m, though ministers maintain that the form of cladding used on Grenfell was never legal. While awaiting new buildings regulations, a temporary restriction was enforced to allow only A1 or A2 class materials to be used in cladding these building.[3]

A £400m fund was set up to remediate social sector homes with flammable cladding. The GLA is responsible for this fund in London and has so far spent £206m of an estimated £275m allocation to begin work on 72 buildings. [4]

Nationwide, £259m from the £400m has been allocated so far, meaning the GLA’s stewardship of the London fund is resulting in far swifter use of the money than elsewhere.[5]

In May 2019 the Government allocated £200m for private sector cladding remediation after continued inaction from building owners. As of May 2019, more private sector residential buildings had no remediation plan in place at all, than the number that had been actually fixed.[6]

Of the 223 tall buildings (hotels, tower blocks, and student accommodation) in private ownership that are yet to be fixed, around half are in London.[7]

The Government introduced changes to the Housing Health and Safety Rating System in January 2018. They claim this reinforces their previous verbal support for councils to begin works on private buildings with flammable cladding where the owner is failing to do so. No council has so far taken this action.

A Joint Inspection Taskforce was announced in June 2018 to speed up private sector remediation. In an MQ answer in May 2019, the Mayor reported that this taskforce was still not operational but might be running “in the next couple of months”.[8]

In 2014, ten London fire stations closed, 14 appliances were removed, and 553 firefighter posts cut in order to deliver £28.8m savings that Boris Johnson ordered. The plan was rejected by LFEPA at the time. He unnecessarily axed a further 13 fire engines in 2015/16, which LFEPA also opposed.

When questioned about the safety implications of the cuts he told Andrew Dismore to “get stuffed”.[9]