At today’s Mayor’s Question Time, Andrew Dismore AM, Labour London Assembly Member for Barnet and Camden and Chair of the Assembly Fire Resilience and Emergency Planning Committee, questioned London Mayor Sadiq Khan over Government inaction on fire safety, the  protection of private flat owners from unaffordable bills to remove dangerous cladding, and the poor prospects for progress if Boris Johnson becomes Prime Minister given his bad record towards the fire service when Mayor.

‘In a recent interview with the Evening Standard, London Fire Commissioner Dany Cotton described the Government’s action on building fire safety since the Grenfell Tower fire as “shocking… horrifying… slow” (Evening Standard, 4 July 2019) and warned that Londoners are at risk because of aluminium composite material on high rise blocks. LFC Cotton continued: “I don’t think anyone in government has responded in a satisfactory manner. We need more to be done. We need for it to be taken seriously.” Do you agree with her appraisal?

‘On Monday, I met with residents from the Paddington Walk development, built in 2005. The private sector leaseholders have been told they will each have to find between £40-60,000 to remove ACM cladding on their 4 blocks, a total of £9 million, having already forked out £1m for fire alarms and waking watch patrols. Resident Ju-Li Leong is typical- she has paid £20,000 and has to pay another £20,000. Another leaseholder who is a teacher faces the latest bills of £40,000.  There may also be additional charges, not yet costed, to remove timber cladding as well. Even though the Government has said it will fund private block remediation, the managing  agents are still insisting on residents coughing up these huge sums, backed by  threats of lease forfeiture; nor will  they guarantee to repay the money if their funding bid to the Government is successful, only offering  account credits- it looks like they are asking for about 5% of the total fund, just  for this one development alone.  Does this not illustrate the complete failure of the Government to get to grips with the demands on private home owners-too little, too late; and will you write to the Housing Minister, asking him to intervene on these residents’ behalf?

‘After the Lakanal House fire ten years ago, which killed 6 people and injured many more, then London Mayor Boris Johnson said “Is there anything we should be doing to ensure that we don’t have a repeat of such tragic blazes? Safety has to be paramount and we will certainly be looking at this to see if there are any lessons that can be drawn”.  As those lessons apparently included cutting 10 fire stations, 14 fire engines and 553 firefighter posts from the London Fire Brigade together with ignoring the recommendations of the coroner for example on sprinklers. Should he become Prime Minister, what prospects are there even now of holding Boris Johnson to his words, by getting him to reverse the failing record of this Government’s post Grenfell dilatory inaction and actually doing something to make safe the 10,600 private and 4,600 social sector homes, still with dangerous cladding in London alone?’

The Mayor said that he fully agreed with the Fire Commissioner. The cross-party Housing, Communities and Local Government Select Committee report published today said that the Government has been far too slow to react to Grenfell. People still live in unsafe housing, but in the Mayor’s opinion building regulations remain unfit for purpose and hundreds of thousands still live in buildings with cladding.

The Government has taken two years to agree funding to remove ACM cladding, but their system doesn’t cover every need, so some homes have become unmortgageable. Leaseholders are struggling with massive bills. The Mayor said he hoped that the next Prime Minister doesn’t let down victims of fires in tall buildings in the way Theresa May has. He agreed to write to the Minister on behalf of the Paddington Walk residents.

‘Whilst I understand that the GLA is going to be responsible for administering the private sector fund in London, estimated to be £150m of the £200m national total, this will be the same process as for the social sector fund so all substantive decisions lie with the Government. The Government has not yet published the prospectus setting out the rules and how to bid, despite their assurances this would be done by the middle of this month, which is now. This foot dragging by the Ministry must stop.

‘After over two years since Grenfell, it is vital that this scheme gets underway as soon as possible. The Government must make it clearer to private sector freeholders and managing agents that they should not be issuing massive and unaffordable bills such as those at Paddington Walk, and especially so, when backed by threats of people losing their homes if they don’t pay up.‘ 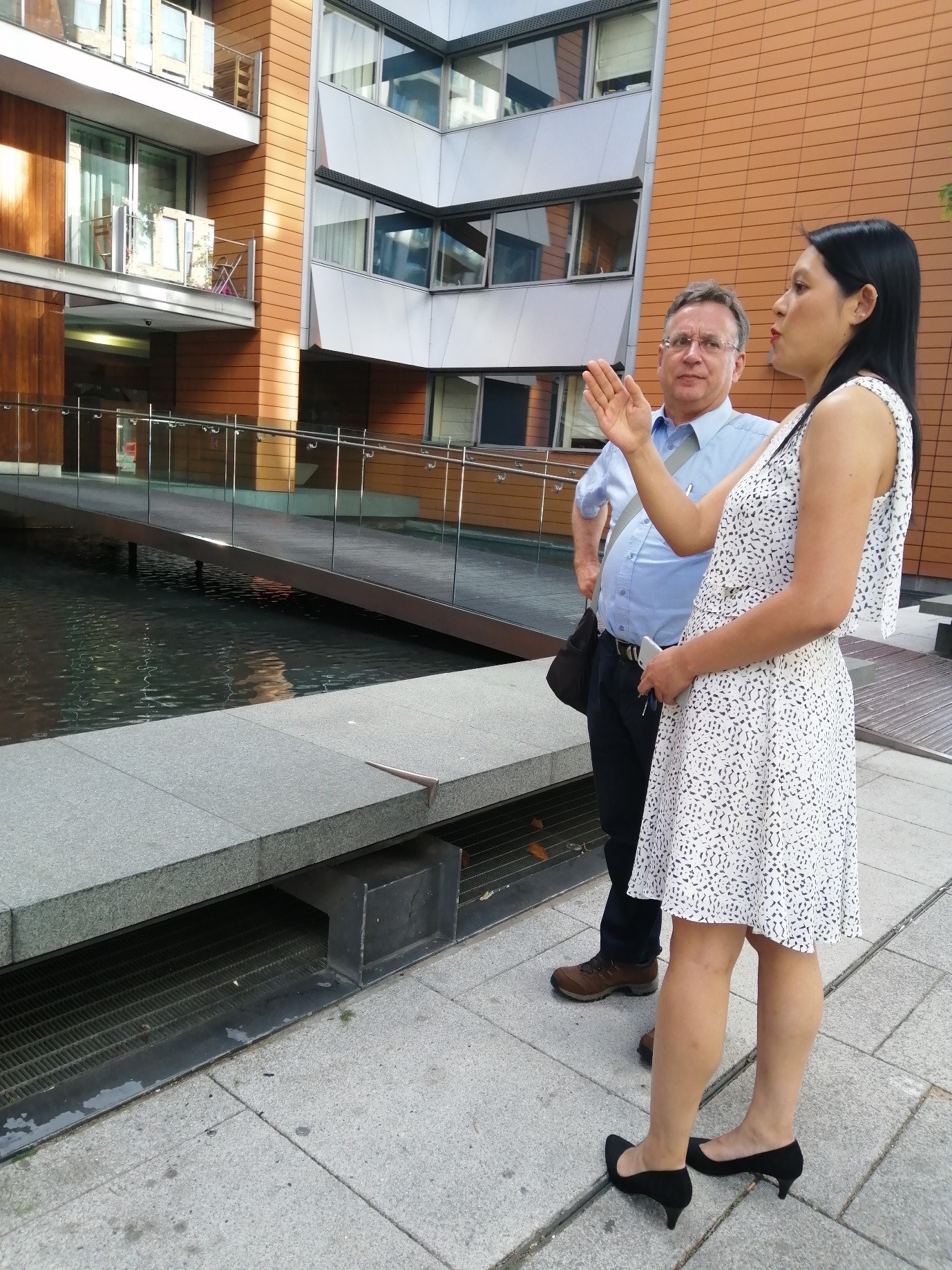 Mr Dismore with leaseholder Ju-Li Leong, viewing the ACM cladding on her block. She faces bills in excess of £40,000 from the managing agents, despite Government assurances that leaseholders should not face such huge bills.

On 20 June, London Fire Commissioner Dany Cotton announced her retirement after three years in the job and 32 years as a firefighter. She will leave in April 2020.[1]

On 4 July, in an interview with the Evening Standard, LFC Cotton said:[2]

“I’m immensely frustrated. The response is slow, people are still at risk. I think it’s not being taken seriously enough.

“It is shocking how slow it has been. It is also shocking the amount of buildings which still have flammable cladding on them, with people living in them at risk.

“We lobby at every opportunity in every political arena to … talk about building regulations, safety and the aspects we want to change.

“I don’t think anyone in government has responded in a satisfactory manner. We need more to be done. We need for it to be taken seriously.”

1 the Hackitt Review, the Government commissioned review, reported a year ago – but implementation  of the recommendations has only just begun and new legislation is not expected until 2021.

2 Whilst the Government introduced a temporary ban on flammable cladding on new residential buildings over 18m last November, nothing was said about other high but less tall buildings, such as the flats in Barking which went up like a torch on 9th June

3 Fire testing the wide variety of other types of cladding didn’t begin till 30th April this year and even  then does not include fire fumes and smoke from them, which are the  main killers in fires, not the  flames.

4 In June 2018 they announced a Joint Inspection Taskforce to speed up private sector remediation but it has only just become operational.

5 It took until two months ago for the Government to allocate some funds for private sector remediation – but bids still cannot be made (though were expected to be made mid July), let alone actually starting the work.

6 As of May this year, there were more private sector residential buildings with no remediation plan in place at all, compared to the number that had been actually fixed, including over 100 in London

7 And of course the public inquiry and police investigation are months behind.