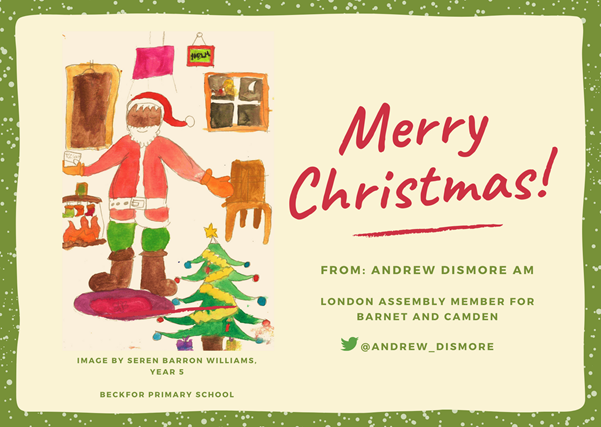 May I wish you the best for Christmas and for the New Year? We have all had a pretty difficult 2020, and let’s hope that things can only get better in 2021, as I enter the last few months of my extended term of office before I retire in May.

As I write this, London has just gone into tier 3 with its knock on effect on families and businesses. It is important that we respect the rules if we are going to come through soon, especially with the progressive roll out of the vaccine.

It is also important to ensure that the demand on the NHS is mitigated, at that time of year when they are under Winter pressures anyway.

A no deal Brexit is looking likely, as I write. This has to be of great concern, not just for trade but also security, an issue I have been pursuing- see the policing section below. we have seen the chaos at the ports already, with goods backing up in containers on the dockside, and we can only expect this to get worse if no deal becomes a reality.

Finally, though it sounds like I am blowing my own trumpet, I was honoured to receive the Jewish Labour Movement’s Lifetime Achievement Award.

Q : Suite 212 in Claridge’s Hotel was briefly part of which continental European nation?

1) Europe, ‘Brexit’ and the economy

1) Europe, ‘Brexit’ and the Economy

The risks of ‘no deal’ are growing and are becoming well known, so I don’t propose to go into the details here. I have been pursuing issues relating to security in particular, see below.

This is potentially creating the perfect storm with the second wave of Covid 19– I have been raising this in the context of the impact on emergency services.

It is clear that the Government have made a lot of mistakes over procurement, as the National Audit Office report showed.

Camden Council have been issuing helpful updates for businesses about Covid.

You may have been following the news re TfL finances, hit so badly due to the reduction in fares income because of the virus. I reported last time on the current agreement with the Government, but it is a moving situation as a new arrangement will be needed from March 2021 when the current agreement runs out. Fares will go up, as demanded by the Government, from March 2020, to coincide with national rail fare increases.

The Mayor has also suggested a potential source of income may be a charge on vehicles entering London, if the Government continues not to allow London to keep the £500 million in road tax paid by London car owners, but taken by the Government  to be used to subsidise roads in the rest of the country.

The idea for the charge is only a proposal for discussion at the moment, but if brought in, it would not apply to vehicles registered at addresses within London, only those from outside.

On a more positive note, a financing agreement has been confirmed to complete Crossrail 1.

Crossrail 2 looks to be off the agenda for the foreseeable future, with no funding available. what this will mean for the interchange with HS2 when completed remains to be seen, but it seems to me that the TfL transport links- tubes and buses- at Euston will now be overwhelmed with the additional passengers using HS2.

TfL are now consulting on their proposed extension of Route 324 (Stanmore Station to Centennial Business Park).

I have become increasingly concerned about the risks to policing and security of a ‘no deal’ Brexit. I raised this with Dame Cressida Dick at the Police and Crime Committee. I was astounded to learn that she had not been involved in negotiations about this, and even worse, the Met had no idea what the arrangements were going to be after the end of the transitional period on 1st January.

I followed up this risk at the Assembly Plenary on policing, with the Commissioner and the Mayor when I highlighted the crime and security risks of a ‘No Deal’ Brexit, only three weeks away

The Government is playing fast and loose with Londoners’ safety during Brexit negotiations and my Ham and High column on post Brexit security arrangements.

There are some positive police stories:

The Met has updated its On-Line Reporting Guide.

Tfl and the Mayor have partnered with Halfords to help curb bike theft:

and locally, police officers are praised for removing almost 250 dangerous weapons from London’s streets in a week.

I also participated in briefings by the LSE on domestic violence; and by the IOPC on stop and search.

I have raised the mess generated by waste sites in Cricklewood.

Both boroughs received grants from the Mayor’s ‘Grow Back Greener’ Fund several projects in Camden and one in Grahame Park.

Issues from Grenfell continue to form the core work of FREP, which I chair. As the Grenfell Inquiry part 2 continues, there are numerous and, increasingly shocking revelations of the utter disregard for fire safety by those responsible for the cladding on the building.

What is also becoming increasingly clear is the magnitude of the problems of the built environment with defects not limited to cladding, but including other construction faults, such as poor compartmentalisation; different dangerous types of cladding; and the risks facing buildings below the 18 metre hight threshold. The Government have estimated there are 62,000 potentially dangerous buildings in London. I raised these issues at December MQT and See also here.

A serious consequence of these problems is the impact on residents, trapped by the cladding fire risks in the buildings in which they live, being unable to move as their homes are unsaleable.

See my article in ‘On London’ about this issue.

See also the written answers to my questions about cladding, November 20.

At this month’s FREP meeting, I particularly focussed on the impact of the virus on the LFB, which has coped remarkably well in maintaining its ‘blue light’ service and the increased demands for inspections of high rise buildings- over 8,000 will have been completed  by the end of the year- and inspecting the growing numbers of  buildings with a ‘waking watch’ – now running at 700- which are visited regularly to check on the effectiveness of the measures. Firefighters also are continuing to provide driver support to the London Ambulance Service.

Finally, quite a few answers to my written questions on fire and resilience, more generally:

No new report this month

As you will be aware, London has moved into tier 3.

It has to be said, though I am deeply sceptical of the Government’s ability to get to grips with the continuing virus crisis, as I am sure many other people are too.

Each month the Mayor produces a report on his activities:

10) My written questions to the Mayor

Q: suite 212 in Claridge’s Hotel was briefly part of which continental European nation?

A: Yugoslavia: Alexander the crown prince was born there when his parents were in exile during WW2. The space was ceded temporarily as it was a requirement that a Yugoslav king had to be born on Yugoslav soil- not that it did him any good with the outcome of WW2 in Yugoslavia!