This report covers a longer time than usual, as it includes the Summer break.

This is clearly a febrile time in politics, with Brexit to the fore; but also with questions over the Prime Minister’s conduct relating to his relationship with Jennifer Arcuri, which the Assembly is investigating for a breach of the City Hall Code of Conduct.

We have also seen terrible knife crimes especially in Camden: I continue to raise the problems facing the police who are overstretched, including by the demands of policing the Extinction Rebellion protests.

Q:  One of Christopher Wren’s smallest buildings is actually in a London park. Which park is it and what exactly is the building?

1 Europe, ‘Brexit’ and the economy

1 Europe, ‘Brexit’ and the Economy

With the 31st October current deadline rapidly approaching, anything I write about Brexit is almost certainly going to be out of date before it is read!

Brexit remains a major concern at City Hall. I continue to raise this with the Mayor who has unequivocally indicated he is in the ‘remain’ camp and supports a second referendum.

The Government finally released their ‘Yellowhammer’ document, about the impact of a ’no deal’ Brexit, though it turns out this is just one of several papers such papers covering a range of issues including policing and public order. These others are yet to be seen. If you wish to read the Yellowhammer briefing, you can do so here.

I questioned the Mayor over the Government’s threat to raise dramatically the earnings threshold for migrants needed to support London’s economy and services.

I commented on the shocking report of the extent of child poverty in Barnet.

And I also commented on the launch of the Mayor’s Good Work Standard.

Finally, the Mayor’s answers to my September written questions on Brexit.

I continue to receive complaints about tube noise from both passengers and residents living near to tube lines. I met, for the second time, with Heidi Alexander, Deputy Mayor for Transport, with senior TfL officers, to discuss with resident representatives what they will do about it. In the short term, I think the only solution is to reduce train speeds, at least off peak and for the night tube, but this is proving problematical with TfL due to the consequences for the service frequency. There is a page on my website where I post any new news on the issue.

Street to platform step-free access at West Hampstead Overground station with both platforms served by two new lifts is now operational. The total cost of the station upgrade – including lifts – was £12.5m.

On a more positive note, the Mayor has secured a month of free travel on the Gospel Oak to Barking Line, given the appalling mess that has bedevilled the service over recent months.

TfL have announced four new cycleways, including in Camden.

I have objected to TfL’s proposal to scrap the 611 school bus.

Knife crime has clearly been the major issue, with the recent murders, including three in one week, in Camden.

I have raised concerns about crime levels and response with the Camden BCU commander- the Met response is here.

I met with resident and business representatives to discuss the high crime levels in Holborn and Bloomsbury, which I am also following up.

Whilst the Government’s has said, to great fanfare, that it will fund 20,000 new police officers across the UK, only 1,369 of these additional police officers have been allocated to London as part of the first tranche, compared to the 6,000 identified and requested by the Metropolitan Police Commissioner as needed in the capital to restore the service after the cuts of £1 billion in the Met’s budget for which the Government is responsible. In any event the Met. needs some clarity from the Government about how they will support and resource putting these new officers in post, as it takes an average of around nine months to recruit a police officer; and new officers will ned the support staff, equipment and bases from which to work.  The Government has yet to address these important points. In the meantime, City Hall has already been working to plug the gaps left by Government austerity by investing in an extra 1,000 police officers to be trained up and in place by January 2020.

I also commented in the local press on police funding, in response to Shaun Bailey

and on violent crime.

The Extinction Rebellion activities resulted in the Met. being seriously overstretched, so they had to pull in every officer available to police the various demonstrations and back fill essential posts. This inevitably included the redeployment of dedicated ward officers (who normally can only be taken away for two events annually- New Year’s eve and the Notting Hill carnival). This clearly impacts on local policing in the boroughs and neighbourhoods.

In 2018, there were around 19,000 offences recorded by the Met Police that involved a hate crime, averaging around 50 offences a day:

The Police & Crime Committee has published a report with recommendations to the Mayor on what he can do to tackle hate crime in the capital.

The PCC has also been looking into the issues around modern slavery, on which we spent our September meeting. The transcript  is available here.

We have also started work on an inquiry into domestic abuse.

The Inspectorate of Constabulary has recently reported on its inspection of the Met.

I have drawn attention to the problem of thieves in Barnet targeting catalytic converters.

I have commented on the Government’s Permitted Development Rights and Barnet Council’s belated adoption of the so called ’Article 4’ exemption, generating the sound of far too many development stable doors shutting too late.

At this month’s meeting of the City Hall Regeneration Committee considering the disposal of public land, I questioned TfL over their public engagement over their proposed developments in High Barnet, Finchley Central, Colindale and Golders Green. They assured me that public responses would be considered, and there would be further rounds of consultation as their schemes evolve. I particularly highlighted the impact of removing their carpark spaces near tube stations. I also more generally raised the issue of the need for key worker housing with MOPAC, the Fire Brigade, and the Deputy Mayor for Housing.

I have formally objected to the planning application for Unit 4 Hyde Estate Road London NW9- in other words the Sainsbury’s West Hendon site.

I have raised with Barnet’s Chief Executive the excessive and in my view unlawful secrecy about what appear to be distinctly fishy goings on about the Sweet Tree Field planning application, Mill Hill.

Finally, I have supported calls for the ‘listing’ of the Midland Hotel, West Hendon.

Though I am not a formal member of the City Hall Environment committee I sat as a ‘substitute’ member on their meeting this month, over the issue of flood resilience in London, as chair of the FREP committee (see below). This was an opportunity to raise the flood risk from the Silkstream, in Colindale, which is of concern to many residents living nearby, given the extent of development in the area and its impact on surface water drainage.

I attended the launch of the Bloomsbury festival.

As the chair of FREP I have continued to pursue relevant issues relating to the Grenfell Tower fire, including the London Assembly response to the Government’s Building Safety Consultation.

Our FREP meeting this month looked at the issues of firefighting in a modern city, which while picking up on a number of related issues, did not cut across the public or police inquiry. The transcript can be found here.

We expect the stage 1 inquiry report to be published on 30th October, so I will comment on that in my next e-report.

I have met with the FBU, to get their views on a range of issues affecting their members. Generally, though industrial relations in the London Fire brigade are very good, under Dany Cotton, the Fire Commissioner.

Firefighters have called for more protection amid fears that they may be more likely to die from cancer than the rest of the population. Research shared with the BBC’s Inside Out programme implied that those working in the profession may be more at risk because of exposure to harmful toxins on their clothes and equipment which contain carcinogens. This is an issue I am following up, including with the FBU.

The FREP committee held an informal briefing from the LFB on staff mental health and on firefighter nutrition.

On resilience issues, I raised the issue of the Summer power cuts with the Mayor.

I spent a morning with the fireboat and its crew, learning their role and how they relate to the other organisations involved in safety on the river. The LFB are purchasing two new fireboats to replace their aging fleet, and they will be in service from about 18 months’ time. 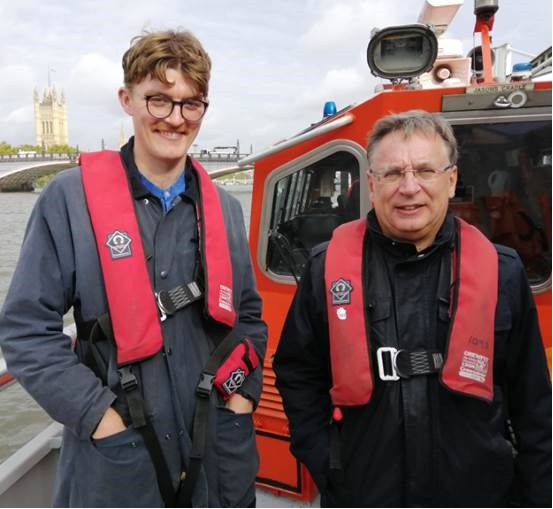 Each month the Mayor produces a report on his activities: you can access his 34th and 35th reports here.

Q:  One of Christopher Wren’s smallest buildings is actually in a London park. Which park is it and what exactly is the building?

A: It’s a shelter for walkers called Queen Anne’s Alcove ,  situated at the Bayswater Road end of the Serpentine in Hyde Park.

Reproduced from an email sent by the Labour Party, promoted by Ammar Naqvi on behalf of Barnet & Camden Labour Parties both at 104 E Barnet Rd, London, Barnet EN4 8RE